Target shooting is one of the most enjoyable activities within the Air Training Corps. All cadets undergo safe weapons handling training and assessment before being permitted to use any live ammunition on a shooting range. This all happens while under the close supervision of qualified team of range staff, who themselves have undergone rigorous vetting and training.

Cadets within the Air Training Corps will learn to fire a number of different rifles. As their proficiency in handling the rifles improves the cadets will progress on to more advanced rifles with increased complexity.

Note: Cadets will only fire rifles and not hand guns or pistols.

There are a variety of different Air Rifles used throughout the Air Training Corps and will normally be of .177in (45mm) calibre. Air Rifles will often be the first stepping stone into target shooting. 200 Squadron uses the BSA Scorpion (.177 in) air rifle.

For the majority of cadets this is the first rifle that they will learn to fire. It is a .22 inch calibre, single shot bolt action rifle. This rifle will normally be used on ranges up to 25 metres.

Cadets will normally have fired either the air rifle or small bore target rifle prior to learning to fire the L98-A2 rifle. The L98-A2 is of 5.56mm calibre and is a variation of the SA80 used by the regular and reserve Armed Forces. A key difference between this and the L85-A2 is that there is no change lever on the L98-A2, preventing cadets from switching to automatic fire.

Cadets will learn to fire this rifle after reaching Wing marksman standard on The No. 8 rifle. It is a single-shot rifle and fires the standard 7.62mm round. Cadets will generally fire on ranges of up to 300m due to its high level of accuracy.

Cadets will development their shooting proficiency by undertaking progressive Cadet Live Fire (CLF) exercises for each weapon fired. They will only advance if they fulfill the criteria of the earlier lessons. Ultimately, this comes down to cadets mastering the four Principles of Marksmanship.

After completing a certain number of CLFs, cadets will be awarded shooting marksmanship badges and certificates. There are four levels that can be achieved. 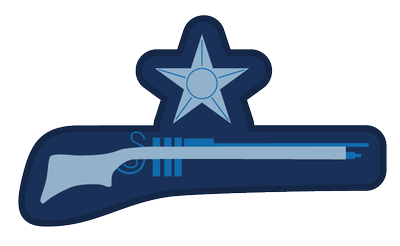 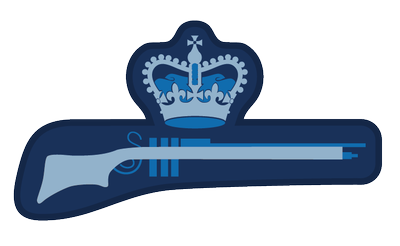 Above are the blue badges that can be acheived using an air rifle, although there are equivalent bronze, silver and gold badges for each of the weapon categories.

Each marksmanship test increases in difficulty and gives the cadets a progressive training programme to work their way up to the top level of shooting. Exceptional cadets may be selected to take part in shooting competitions, even competing at a national level against other youth organisations.

By continuing to browse or by clicking "Accept Cookies," you agree to the storing of first and third-party cookies on your device to analyse site usage and enhance the user experience of this website. We do not collect your personal data for marketing information. Ready our Privacy Statement for more information.